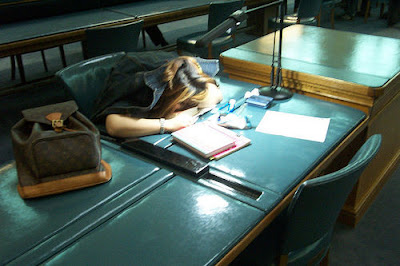 After class, I have a standard routine. I think most teachers do. One of my professors in graduate school used to refer to it as “my collapse,” as in: “after class, I go to my office and do my collapse.”

I think there’s something about teaching, the kind of energy and attention that it requires, that engenders a powerful and urgent need in the teacher to veg the hell out after class.

At least, it does so for me. After class, I feel triumphant but introverted. I need to go and be alone and do something mindless.

My routine, my collapse, is fairly humble: I go down one flight of stairs and into the faculty lounge for a different department from the one that I teach in (it’s simply the closest faculty lounge to the classroom). I get onto the computer and enter that day’s attendance in the academic software package that we use. I check my campus email, erasing the inevitable all-campus bulletins about a lost iPod found in the library, a reception for the new dormitory, a scheduled computer network outage for a time when I won’t be on campus anyway, and feeling slightly irritated all the while at the unfamiliar PC interface and low-res terminal screen.

Today I was in the midst of this process when a student wandered into the lounge. She checked out some empty cubicles where the department’s administrative staff usually work. “Is there a place back here where I could take a test?” she asked the room. I was shrugging my shoulders when a heavyset man who teaches I know not what butted in. “Take a test?” “Yes,” she said. “I’m making up a test for my economics class, and…”

“You can’t take a test without a proctor,” said the man.

“Your teacher can’t just give you a test to take without someone watching over you to make sure you don’t cheat.” Somehow, his suggesting to this student right to her face that she might cheat made me feel ill. Though maybe it’s necessary. What do I know? The man appealed to another male teacher who was using the copying machine. “She can’t just take a test, just, on her own, can she? That’s ridiculous.”

The student looked indignant and opened her mouth.

“You’re not in trouble,” the first man assured her. “Go down and tell your teacher that you need to have someone proctor your exam.”

“That’s ridiculous,” said the teacher at the copying machine, agreeing with the first. “They might as well make it a take-home exam.” He almost snorted. The student slumped her shoulders and left the lounge.

When next I tuned in, the teacher at the copying machine was complaining to the first teacher about his class. “I assigned them this reading,” he was saying. “And did they read it? No. Did they have the BOOK? No. ONE student had the book…”

I wanted, frantically, to distance myself from their petty complaining. I thought they sounded like lousy teachers. Grumpy, middle aged, and resenting their students: I could not imagine anything more unappealing. I would never be like that. I would never be doctrinaire. I would never be all about the rules, the rules, the rules…I spent the first part of my life, I felt, hating teachers who felt that same delight in exercising their meager powers over students who, at the end of the day, did not and would not care as much as the teachers did and so, ultimately, remained the freer ones.

And yet, the exchange probably bothered me so much precisely because I’ve been growing annoyed at my students recently.

The other day, I had a student tell me that she’d been having a hard time writing her research essay because she’d been in the hospital with a kidney infection. This same student told me earlier in the term that there was a fire that destroyed part of her apartment. Now, these things could both be true, though I have yet to see a doctor’s note. This girl is not a great student, though I appreciated her at the beginning of the term because she was a bit of a loud-mouth, in a good way: she was the student who’d pipe up and say, “I hated this reading!,” and at least, in that way, get the conversation rolling.

Anyhow, we were sitting in a one-on-one conversation on Tuesday, and I was being somewhat aggressive with her because she’d handed in a draft of her research paper that was only one and a half pages long, without any in-text citations, without any reference list. She had not, in fact, done any research yet. I can’t remember what I said to her but I remember seeing her blush, under her foundation, and thinking to myself: ‘Good! Blush! You’re not even TRYING at this, you little…’

Snap back to the grumbling professors by the copying machine. I hated them precisely because I did know where they were coming from, and I didn’t want to know it.

Yes, I’m guilty of being a utopian thinker. I want everyone to relate on terms of honesty and mutual respect. I want my students to be engaged, and me too, and I get disappointed when they’re not. How can I not let this become a downward spiral, where I respond with anger and they respond by doing less, by sinking to my opinion of them?

That’s my dose of teacher torture for this Thursday afternoon.