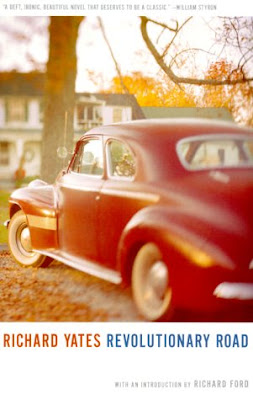 “Earlier today I was feeling sick, and fantasizing about not going to class tomorrow,” she says to her sister & roommate extraordinaire. “But I really don’t think I can justify it.”

“It never occurred to me that teachers ever felt that way,” said her sister.

Class on Tuesday went so badly. At first, only three of my sixteen showed up. I’d planned out this in-class writing exercise that I felt pretty good about: first, have a discussion of the novel, answer questions, to prevent a ‘we just don’t understand it at all!’ moment like what happened last time. Then, break them into groups and have them plan and write a short essay in class about a simple question (“Do Frank and April Wheeler have a good marriage?”) that they can argue effectively either way, which will make them close-read just a little bit, think just a little bit about their own values, and probably give them a leg up when they go to do their at-home essays. Yesss.

But then only three students came to class.

After ten minutes of waiting around to see if anyone else showed up, I felt angry—I hadn’t wanted to get up and come to class either, damn it—so much so that I almost said, I can’t teach just three of you, and let them go. Perhaps not the most mature response, but it’s the one that came to me. A couple more students showed up, though, and we eventually swelled to six or seven. We decided to do the writing exercise all together, though, so I spent most of the period up at the board, helping them to plan and outline an essay. It was like pulling teeth. I’d ask something and just get silence, with the occasional eye-roll. I could not understand whether the students hadn’t read the reading, didn’t understand the reading, or were just not in the mood to deal with class. (Or, I wondered in a later, calmer moment, as I was walking down into the subway: are they just not socialized to be able to talk about books yet? Am I modeling that for them from step one? Do I simply take interpretation, which has been a part of my life from the moment my English-professor mother rocked me in my cradle, so for granted that I’m mistaking ignorance for obstinacy?) I felt like I was talking to myself. I think that at one point I used the word “fuck” under my breath, but probably audibly so.

Luckily, one talkative student arrived, late, to save me. She and I carried most of the class ourselves. After everyone else had left, I thanked her for her energy. “I’m enjoying this book,” she said. “I don’t understand why people wouldn’t be interested in talking about it.” The act of thanking her left a small gleam in my heart to get me home, but damn. I did not want to go back in there today.

It’s very weird. Today just went better. And I think that my pissed-off attitude from last time might actually have helped.

I didn’t spend a hundred hours prepping class, because I was angry and I didn’t feel like it be worth it to sink a lot of work in if only a few students were going to show up anyway. I did my other stuff, and graded some papers, and then noodled around on the computer…doo de doo…oop, it’s starting to get late…hmm…okay, shit, I really have to do this reading. I sat and did the reading, and was not able to concentrate well, partly because I was panicked about the next day. Curiously, I felt like that state of mind got me closer to the experience of being one of my students reading the book than I had yet felt. Maybe I was filling with a new empathy!

Quickly, like a shopper in a store that’s about to close, who grabs just any-old-thing off the shelf, I decided that tomorrow we’d do close reading. It’s a skill they need to learn, we might as well do it tomorrow. I already had a handout about close reading from when I taught at Big University. I’d copy that, and we’d close read…this one passage on pages 218-219 that I marked out, where Frank and April are fighting and Frank is acting totally vain and weird. I want them to catch onto the fact that he’s described here as being like an actor, and that this is key to understanding Frank’s whole character. And then, we’ll do a free-writing, or maybe–yeah!—I’ll assign them a close-reading to do as homework, and give them time to start on it in class if I need to.

Work expands to fill the time available, as the old saying says, but sometimes, luckily, it also works the other way. I was in bed by 11:30, ready to be up and swinging at 6:30, in class by 8.

I felt nervous on the subway this morning about my less-than-thoroughly planned lesson, but I think that in the end it gave me energy. Instead of being mad at the students for not showing up and consuming my lesson, I was the one scrambling to keep it hanging together. The nervous energy worked out. I gave a pretty decent off-the-cuff description of Freud for the very uninitiated. One quite talkative student and two or three somewhat talkative students kept things going. We had about eight total. We talked for about an hour, I didn’t have to dip into the start-your-homework-in-class gambit, and the students themselves came up with an important point about the novel which I know they came up with themselves because I hadn’t ever formulated it for myself yet in quite those words: Frank and April never say what they mean. John Givings, on the other hand, who is supposedly “insane,” always says what he means. He also seems to know what he’s feeling better than the ‘sane’ characters do. Hmmmmm.

God bless that Hmmmmmm. That is what this business is all about.